Issues and Legislation We Are Following

For information on the Endangered Species act go to https://www.worldwildlife.org/pages/the-us-endangered-species-act

The Animal Legal Defense Fund files high-impact lawsuits to protect animals from harm, provides free legal assistance and training to prosecutors in their fight against animal cruelty, supports animal protection legislation, and provides resources and opportunities to law students and professionals to advance the field of animal law. 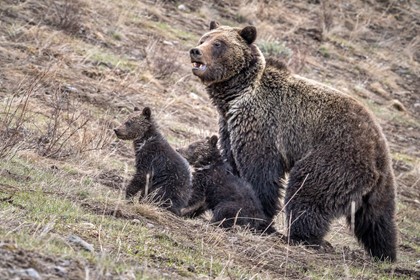 Green Kids has been closely following the story of Felicia a grizzly bear with two baby cubs or coys (Cubs of the Year). She lives in Togwotee Pass in Wyoming.  This bear is a beautiful mom that has done absolutely nothing wrong other than live on a highway road where people have stopped to photograph and admire her.  According to the Wyoming Fish & Game this has created a safety issue. So they have hazed her - this is a method used to remove bears from areas to ensure she does not return or she will be either euthanized or relocated (see article).

Also this link has some additional information on the situation.  Lots of detail! 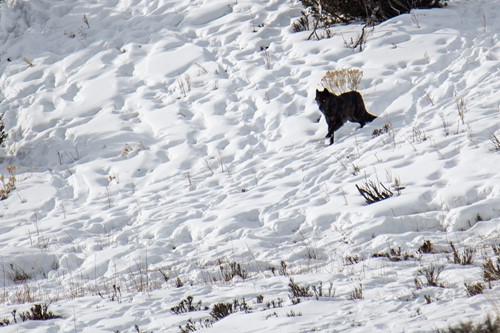 I was fortunate enough to get this photo while in Yellowstone a few weeks ago. The wolf you see in this photo was part of the Wapiti pack located in the northern part of the park.  I also was excited to be meeting Rick McIntyre, a famous wolf expert who has been watching and observing wolves for many years!  Rick's valuable insight from this work has brought a significant amount of information and data to the park about the lives of wolves.  He first started logging sightings, after wolves were introduced into the park in May of 1995.  Since then he has recorded over 100,000 wolf sightings.  After he retired from working at Yellowstone Park, he began writing books about the lives of these amazing animals. He has authored The Rise of Wolf 8: Witnessing the Triumph of Yellowstone's Underdog, The Reign of Wolf 21: The Saga of Yellowstone's Legendary Druid Pack, and the Redemption of Wolf 302:  From  Renegade to Yellowstone Alpha Male.

These stories are very important because wolves desperately need federal protection from extreme and cruel wolf-killing laws recently enacted in the states of Montana, Idaho, and Wyoming. These laws are destroying the state’s wolf populations, undoing years of progress in wolf conservation. This story from the Washington Post describes what is happening to our wolves of Yellowstone. If you get a chance please take a few minutes to read this article. Our park and the surrounding area have lost about 85 wolves to hunters this year and one entire pack has been decimated. Something needs to be done to stop this or our wolves will be gone soon. 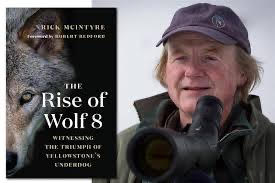 This is one of the books written by Rick. It is an amazing story - Amazon.

The federal government is evaluating the wolf hunting regulations being administered by Wyoming, Montana and Idaho.  These new laws allow little to no restrictions of the taking of wolves - including reduction of the population significantly.  See article. The change in hunting laws allow hunters to take wolves in any way they see fit - baiting, trapping, etc. - in fact, in Idaho, the State is actually paying hunters to come in and shoot them from helicopters or whatever method they so choose.  There are hopes that a moratorium will be put in place to provide temporary protection and relief to the wolves from being slaughtered.

A tri-memorandum of agreement (MOA) is being put into place between Wyoming, Idaho and Montana to delist grizzly bears – article.  Grizzly bear biologist, Dave Mattson wrote in Grizzly Times blog post published before the plan was approved, “The methods contained in the States’ MOA are so egregiously flawed as to call into question the competence and motives of the wildlife managers who concocted them.”  This MOU is close to being approved and will create many issues for proper bear management within these states.

We have been watching changing legislation in Montana, Idaho, and Wyoming.  These states are allowing the killing of large populations of its wolves.  At one time the wolves were under the protection of the Endangered Species Act. This is no longer the case.  Not only are states allowing hunting of the wolves, but they are also allowing non-humane ways of their killing – including baiting, hunting from helicopters, hounds, etc.  No compassion in a kill - this is so very sad (see the newspaper article).  The US Fish & Game is going to review the information but does not have any plans to address it for at least a year.  By then much damage will be done to the wolf population. In addition, sadly part of one of the most popular wolf pack or Junction Butte pack were killed.  This is because the State of Montana is now allowing shooting of wolves close to the perimeter of the park. 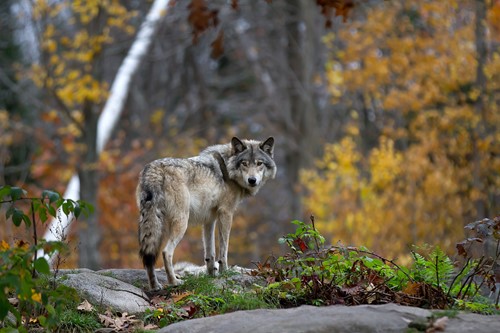 Grizzly Issues we are following in the Greater Yellowstone Ecosystem

Idaho Governor Little has submitted a petition to the US Fish & Wildlife to remove grizzly bears in the Lower 48 US from the Endangered Species act as has Wyoming and Montana (see https://www.eastidahonews.com/2022/03/little-petitions-to-have-grizzly-bears-removed-from-endangered-species-act/

The triple bad environmental leadership we have in our states. All three of the governors are allowing wolf hunting, and now requesting to remove grizzly bears from the endangered species act. These 3 governors have shown that as a state they are not capable of properly managing wolves so why should anyone listen to them regarding grizzly bears. Jurisdiction needs to be given back to the Federal government and removed from the states.

Bear Proof Garbage Cans May be a Requirement in Jackson, Wyoming!

Grizzly 399 is sleeping with her babies right now (at least we believe she is).  She normally comes out of hibernation around the end of April or maybe even as early as end of March.  This year will be different since she will be moving her 4 cubs on to go on their own. Grizzly 399 has done an amazing job taking care of 4 cubs and making sure they survive to be able to go out on their own. She is amazing!  But last year she started getting into some trouble as she found herself around people eating foods people have been leaving out. Part of the problem are garbage cans that are not bear proof.  Last week, the Jackson City Council had a meeting and it looks like a requirement may go in for residents to use bear proof containers.  Keep your fingers crossed and prayers said!  If this is done - it will save many bears from becoming habituated and possibly euthanized.

Right before the holidays, our friends with Grizzly Times held a webinair discussing the impacts and life of Grizzly 399.  I think for our newsletter today, it would be most fitting to post the link - and I hope you can watch this.  The presentation includes grizzly bear experts David Mattson, and Louisa Wilcox with world-renowned wildlife photographer, Thomas Mangelsen. There is also a guest presenter of Jane Goodall with her words of wisdom to save these iconic animals.  If you can click here to view this excellent discussion.

Grizzly 399 is in Hibernation.

There have been a number of grizzly bears euthanized in the Greater Yellowstone area.  Unfortunately, Grizzly 399's daughter, 610 has lost both of her sons. This is because the National Park and other wildlife officials have determined that they have turned into problem bears due to habituation.  We hope that we don't continue losing bears because of the irresponsible behavior of people leaving food in unsecured areas - see article.

Also before I published this newsletter - I found out that there is a petition going around asking for bear proof garbage be required in areas where people closely live to grizzly bears in the Teton County area - please sign this petition and share it!

Grizzly 399 is sleeping with her babies right now (at least we believe she is).  She normally comes out of hibernation around the end of April. This year will be different since she will be moving her 4 cubs on to go on their own. Grizzly 399 has done an amazing job taking care of 4 cubs and making sure they survive to be able to go out on their own. She is amazing!

Green Kids has written two stories about Grizzly 399, one of the most famous bears in the world. She lives in Teton National Park, Wyoming. She has had many cubs over the years but at the age of 24 years old, she surprised the world with the birth of 4 babies. Grizzly 399 is a very good mother and over the years has learned to live by and around people with no real negative situations arising.

However, this last month she wandered into Jackson, Wyoming late at night – not such a good idea. She was detected by the Jackson Police Department who notified other government officials and they safely escorted her out of town. I can’t imagine walking out my door and being confronted with 5 grizzlies walking towards me!!!  But word on the bear street is that all 5 of them are in hibernation now!

Read our book Grizzly 399 Hibernation Pandemonium, to imagine what it would be like for 5 large bears to be in a small den!

Here is the article and accompanying video of Grizzly 399's family trip into Jackson, Wyoming!

Green Kids has written two stories about Grizzly 399, one of the most famous bears in the world. She lives in Teton National Park, Wyoming. She has had many cubs over the years but at the age of 24 years old, she surprised the world with the birth of 4 cubs. She has over the years learned to live by and around people with no real negative situations arising. But in the last year and a half she has started to travel back and forth between the park and Jackson, Wyoming and even a bit farther south. She has been moving a lot and eating bird feed from peoples homes they put out, honey from local Apiary’s, and horse feed.  The Wyoming Fish & Game in conjunction with the Park Service are trying to manage this without creating a negative situation – please hit the link on this article to see the latest of what is happening. We pray and hope she will return to the park and get ready for hibernation. 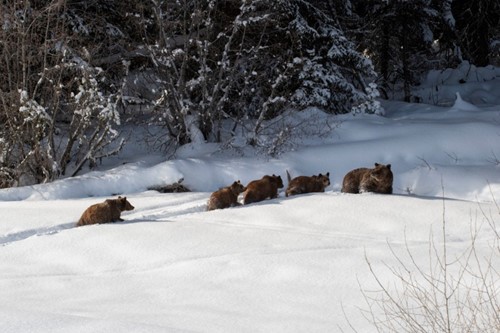 Legislation for Big Cat Issues in the US

The Big Cat Public Safety Act makes it illegal for exhibitors (such as circuses and zoos) to allow direct contact with cubs. This legislation was reintroduced into the senate in April 2021. The Netflix Show with Joe Exotic has really brought this issue to people’s attention here in the states.  Africa is not the only country dealing with similar issues.