Join kids from all over the world in learning about the earth and its citizens, both human and animal kind. Quiz yourself on your animal knowledge, have fun reading and playing games, and challenge yourself to help our planet! Along the way you can earn points and rewards, too.

For more in-depth projects try our

For elementary students, we have developed some fun projects covering issues related to grizzly bears (make a comic strip featuring our own Grizzly 399) and plastic pollution (upcycle plastic from The Belize Trash Monster). Inspired Classroom Challenges are standards-based, and they are FREE to participants, while building skills such as critical and creative thinking, collaboration, and communication. For more information, click here.

Animal Holidays for October 2021
Some of these holidays are hilarious!  Don’t forget to hug your sheep on October 30th!

Salmon are a fish well known in the northwest of the United States. They are in danger of being on the brink of extinction. There are currently 14 species of salmon and steelhead in the northwest and they are "deemed endangered and are protected under the Endangered Species Act, 10 are lagging recovery goals and five of those are considered “in crisis,” according to the 2020 State of Salmon in Watersheds report," which was released in early 2021.  These fish are a critical food source to at least 138 species, from insects to orcas.

Human population encroachment and development has reduced fish habitat - this includes development along shore lines, dams, sea walls and other types of bulkheads.  Global warming is also a contributor.

According to Sam Mace, the Inland Northwest director of Save Our Wild Salmon, a coalition of groups committed to preserving salmon in the Columbia-Snake River Basin, thousands of steelhead trout were expected to run in a main tributary of the Snake River but there were barely 300 of them, she said.  We have work to do.

For more animal facts, check out our Animal Highlights

So Fall is in the air here in the United States!  The days get shorter and cooler as we get closer to the end of the year.  So what can you do to make an environmental difference this Fall?  In our yard we always have tons of leaves falling off of our trees – so why don’t you mow your leaves versus raking them.  This will reduce bags of plastics full of leaves and leaf mowing will provide natural decomposition and feed the soil.  It also provides habitat for small insects.  So maybe take a different approach this year after you have done a leaf jump!

Check out our coloring pages or play some fun games! 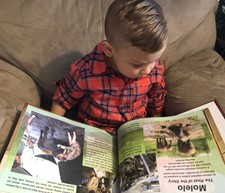 Want To Know More? Try Our

Animals are so fascinating! Learn more about them here or visit our store for additional educational materials!